How to Reduce User Error by Appropriately Sizing Controls

When interacting with a touch screen, controls should be sized such that the user does not activate neighbouring controls unintentionally.

In this 30 second clip a signaller tries to enter his credentials using an on-screen keyboard. However, he does not notice that he misses the right keys several times, especially when typing the password. The controls were approximately 14 x 14 mm, i.e., well below the common recommendations.

Operators interact with user interface controls on a touch screen. To touch a control they have to position their arm, which may increase arm fatigue over time.

For designers there is a trade-off between the size of controls and available screen real estate. Users must be able to interact with controls without unintentionally activating other controls located nearby.

Previous studies have shown the relation between the size of controls and error rate and speed, respectively. Sears and Shneiderman (1989) report a significant increase in error rate and task duration with decreasing target size and evaluate the application of Fitts’ law for touch screens. They used a stabilisation algorithm to support selection of very small targets.

In a later study (Sears et al, 1992), they investigated typing on touch screen keyboards using the lift-off strategy as stabilisation algorithm. The results showed that larger controls significantly reduce error rates and time required to complete the typing tasks. They furthermore identified experience as a major influence on task time.

More recently, Schedlbauer (2007) compared track ball, touch, and stylus input and determined that spacing does not seem to have a significant effect on performance. The study determined stylus input as the most accurate with a recommended minimum size of controls of 12 mm. 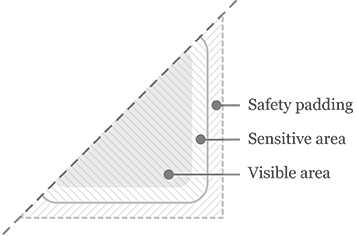 To calculate the actual required size in pixels use the real size calculator. It calculates required minimum sizes for user interface controls and fonts according to various standards and for different screen resolutions.