When performing an action the system reports the result of the operation and its status in general.

The user requires system feedback to direct attention to events, which may be out of the visual focus.

The rationale here is to avoid unnecessary steps to confirm notifications, e.g., by using message boxes, and to avoid irritating audible clues, e.g., using the same audible clues for different types of messages.

Animated visual clues may serve to attract attention if they take place in the peripheral vision, which is more suited to detecting movement.

Audible clues must be adjusted to the importance of the notification such that the operator is able to distinguish certain types of messages based on the audio signal.

Operators are more easily able to direct their attention based on visual and audible system feedback.

This pattern prevents users from being disrupted in their workflow by notifications, which are not safety-relevant. 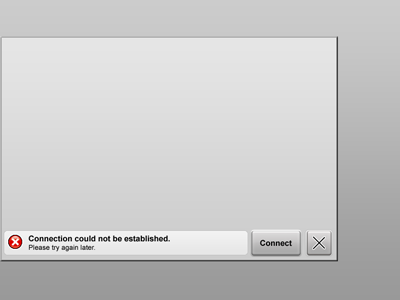 The sample shows an example critical error message upon failing to connect to a remote system.