Selection controls allow users to pick one or more items out of a given range. 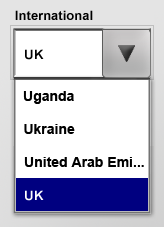 The dropdown pattern is especially useful when screen real estate is a limiting factor. In such cases, it may act as a replacement for list controls, which consume more vertical space.

However, dropdowns only display the current selection and hide the list of items. When designing with this control, no safety-critical functions should be assigned to it — safety-related functionality should always be visible.

Another limitation of is the maximum number of items it is able to hold. The list must be able to display all items without the need to scroll.

Press the Up and Down buttons to scroll the list or drag the thumb.

The circular list pattern is a modification of a standard list with regards to its scrolling behaviour. When the first or the last item respectively is reached and the user tries to continue scrolling up- or downwards, the list jumps to the other end.

The selector control pattern is somewhere in between a tabbed pane and a classic radio button group known from desktop applications. It can be used to select an item out of several choices, or to switch views.

When used to switch views no safety-related functionality should be hidden in these views because they may disappear from sight.

The pick List pattern presented here is a compound pattern consisting of:

The pick list solves a shortcoming of dropdowns and lists: These patterns are only useful for single selection. Multiple selection is almost impossible in dropdowns, and not recommended for lists because the selected items can scroll out of sight, or the selection may be cleared inadvertently.

Selection controls are used in this pattern collection to increase safety. When selecting an item no action is performed — users need to confirm the action by interacting with the imperative control.