Large areas of control must be controlled by signallers such that workload is distributed evenly. 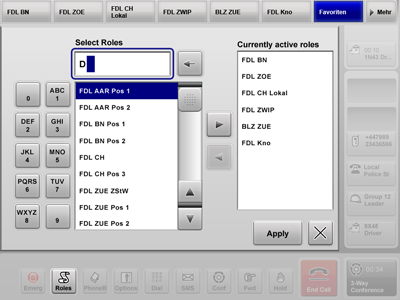 The sample screenshot shows all relevant user interface components, except login: The role bar on top, an open role management dialog, and the function key. All other areas of the screen are greyed out.

Operators need to manage the assignment of roles to their workstation.

The process of downloading role data to workstations poses performance problems because it takes place within a distributed network often connected by small-bandwidth phone lines. However, this process must be completed quickly due to the ongoing events in a control centre.

Signalling is based on the distribution of work between signallers. Large areas of control are split up in smaller areas and distributed among the operators. Depending on the shift and on the traffic situation the distribution may change such that an operator holds several areas at the same time. A “role” contains the following data items: A set of speed dials, phone book entries, templates for text messages, and others.

The proposed solution for managing roles at the user interface consists of a login screen, a function button on the menu bar, a role bar at the top of the screen, and a role management dialog.

The role management dialog consists of a list of all available roles and appropriate mechanisms to find the appropriate entry, e.g., in combination with a search or a quick search feature. It must be possible to select role, for instance, using the pick list pattern. Depending on the requirements of the railway organisation, operators may be able to relinquish roles themselves; in some cases, operators may only fetch roles to ensure areas are always manned.

Using this pattern allows to distribute work among signallers and to manage one of the main work stressors in a control centre, traffic frequency.

Has been used in several European railways voice communication devices.

Feel free to provide your comments, reports of usage of this pattern, or feedback in general!